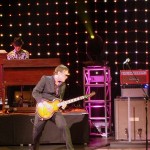 When I interviewed Joe Bonamassa before his show in Nashville last year, he mentioned that Gibson was going to be stopping by later that afternoon to drop off a one-off custom guitar that Joe had them build. He played the guitar later in the show, which he is calling the "Bona-bird," and it's his take on the Firebird I. It has a Les Paul body with a single pickup and a Firebird … END_OF_DOCUMENT_TOKEN_TO_BE_REPLACED 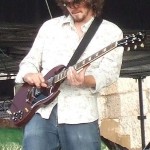 This week's Photo Friday post is a day late, but here is Luther Dickinson playing with the Black Crowes in 2008 at the Newport Folk Festival. I had a chance to see Dickinson play with the Crowes in 2009, and his guitar playing was definitely one of the highlights of the show. I'm looking forward to seeing him play with the North Mississippi Allstars this week in support of … END_OF_DOCUMENT_TOKEN_TO_BE_REPLACED 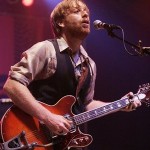 This is a photo of Dan Auerbach from the Black Keys playing at last year's Bonnaroo Music and Arts Festival. Dan has some of the coolest vintage guitars. The one he's playing below is a Harmony H76 Thinline. The photo was taken by Jeff Christensen/Associated Press. … END_OF_DOCUMENT_TOKEN_TO_BE_REPLACED 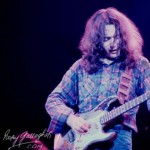 This is a photo of Rory Gallagher playing his well-worn Stratocaster around the time of his Irish Tour '74 album release: Photo credit: www.rorygallagher.com … END_OF_DOCUMENT_TOKEN_TO_BE_REPLACED 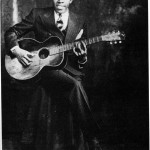 Robert Johnson is one of the most legendary blues musicians of all time. His influence is heard in many modern blues artists, and his songs have been covered by legendary artists like Led Zeppelin, Eric Clapton, the Rolling Stones, and the original incarnation of Fleetwood Mac with Peter Green, among many others. This is one of, I believe, only two known photographs of … END_OF_DOCUMENT_TOKEN_TO_BE_REPLACED