Robert Johnson is one of the most legendary blues musicians of all time. His influence is heard in many modern blues artists, and his songs have been covered by legendary artists like Led Zeppelin, Eric Clapton, the Rolling Stones, and the original incarnation of Fleetwood Mac with Peter Green, among many others.

This is one of, I believe, only two known photographs of Johnson to be discovered. 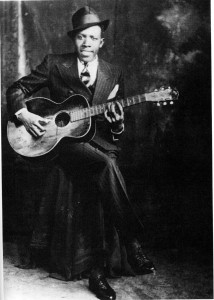