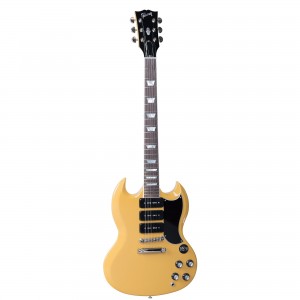 The all new Gibson Limited Edition Gary Clark Jr. Signature SG guitar captures the spirit of creative inspiration. Finished in an exciting, vibrant Gloss Yellow and featuring a trio of aggressive Gibson P90 pickups, this guitar embodies the organic and sonorous sounds of one of this generation’s most influential guitarists, vocalists and songwriters.

Gary Clark Jr. is perhaps more widely associated with the Epiphone Casino, which Epiphone celebrated in the Blak & Blu Casino Signature model they made for him in 2015. However, he has been playing an SG quite a bit since collaborating with the Foo Fighters on their Sonic Highways album in 2014. Clark has stated that Foo Fighters’ guitarist Pat Smear gave him an SG during those sessions.

Earlier this year, Clark was seen playing a new SG at the Grammys show. It turns out that it was a new signature model.

This model differs quite a bit from the typical SG in that it has three P90 pickups. Gibson SGs have had P90s before, of course, but you rarely see them in a three pickup configuration. It also differs from other SG models in that it is gloss yellow, has 24 frets, and the controls are laid out in a three volume + one tone configuration.

Everything else appears to be fairly standard for SGs:

The street price of $1499 seems pretty reasonable for an American-made signature guitar. The guitar is currently (as of this writing) available at Zzounds while other retailers are taking pre-orders.