Ed. note: This is the third in a series of posts by Guitar Lifestyle contributor Russ about the ukulele and its growing popularity among musicians and educators. See the first post, The Ukulele as an Educational Tool, and the second post, Review: The Ukulele Site.

Aloha! Today we’ll be talking about homeschooling and the courseware I chose to teach my kids music and the ukulele in particular.

And that has ALWAYS been my experience whenever I tried to teach anyone the guitar. I would figure out a good starting point, get halfway through a lesson or explanation, and then realize that there was a required piece of knowledge I forgot to say BEFORE I got to this point. So I would backtrack and the student would always be confused, bored, and likely to give up. 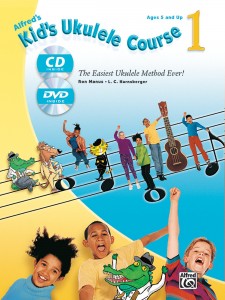 So when my wife said I was in charge of teaching music, I did what any sane instructor would do and ordered a course so someone else could teach it. Specifically Alfred’s Ukulele Course For Kids 1 (there are two total). It comes with a DVD and CD so you can hear how things are supposed to sound and watch it as well. My approach was to take this course and break it into pre-determined chunks so my kids don’t get overwhelmed by the amount of material. All truth be told, there’s not a lot of material to it – at least for grown ups – but the goal of learning music and the ukulele is better achieved by first learning quarter slashes and how to strum, then how to strum the C chord, etc. Studies have shown that people are WAY more likely to succeed in accomplishing their massive goals if they break it into small goals that lead to it, even if that list of small goals is gargantuan. Little things that you can accomplish make you motivated to continue because you are progressing, perhaps slowly, but progressing nonetheless.

The course is laid out fairly well and I only switched the order of things explained a couple of times and even then it was because I know my kids and how they will probably react to learning X before Y.

Regarding the DVD, I got it for the kids to watch. If they watch it and are motivated by the instructor on the screen and pictures of cartoon animals, then that’s great – whatever works for them. But I still have a role when it comes to the DVD viewing: when they finger chords, I can be a real-life model. Watching where people put their fingers on a screen and then mirroring it can be tricky, but if you saw it on TV and then were able to see someone do it right in front of you and able to get at whatever angle to best for you to see, it would be easier. I could tell them “close, but finger 3 needs to be on the string above where it is,” and they would get it. That immediate feedback is valuable.

And you have to keep in mind that we’re talking about teaching children here. There is no advantage you should spare because the ultimate goal is to make them happy while they’re learning. If they’re happy when they’re learning, they’ll feel good about the instrument, practice more, get better, and then be motivated to learn more. There’s no benefit at ALL to making it harder in any way. It’ll only lead to frustration and anger and a willing defiance to practice. I see this a lot in the guitar world where instructors or parents insist on their kid learning on an acoustic. The kid can barely get their hands around the thing and then they have to press down thick strings, hurting their fingers and making their progress slow and all for the benefit of them later on picking up the electric guitar and marveling at how EASY it is to play. We should approach teaching children with the mindset of making it as easy and fun as possible from the very beginning or they may never want to pick up the proverbial electric guitar to see how much easier it is.

So seriously: knock that off. It’s a dumb thing to do.

The book is laid out so that it teaches chords first so the kids can get strumming and singing (and perhaps more motivated to continue) before it treads into the dangerous world of reading actual music and integrating single notes with chords in order to play way more awesome songs.

Speaking of songs, there are many in the book and I will use most of them. The ones I won’t are just a bit too… vintage and the reason is my kids don’t know them. I know I can teach them new (old) songs and there’s nothing wrong with that, but I want them to know how the melody should go before they start learning it. It’ll cut down on the time that they spend figuring the timing out and everyone is more stoked to learn songs they know rather than songs they don’t.

If you’re considering teaching the uke to your kids, this is a really good course to start them on and I will go into it more specifically as I teach it perhaps with lessons learned, tips, and pitfalls that I fell into and can warn you about.