You are here: Home / Essays / The Ukulele As an Educational Tool

Ed. note: This is the first in a series of posts by Guitar Lifestyle contributor Russ about the ukulele and its growing popularity among musicians and educators. 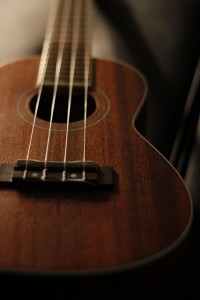 Aloha! Since this is my first editorial article for Guitar Lifestyle, I figured it would be best if I introduced myself and explained why I’m here:

My name is Russ (hello) and I have been playing guitar for seventeen years now. Don’t let the number fool you – I should be much better than I am, but as a student of punk rock and a fan of the excuse that goes along the lines of “I only play what the SONG needs,” I can still sleep at night. I’m a big fan of Gretsch electric guitars and Taylor acoustic guitars. Fender and Gibson get honorable nods (who could possibly imagine a world without a Telecaster or SG?), but in the end, Gretsch and Taylor are co-owners of 95% of my GAS list.

I also have two kids, ages seven and five. Why does this matter to you? Well, it helps explain why I’m here. My kids are entering home school this year and my wife decided against sending them to music lessons. She’s read a lot about how children should be taught music (start on a piano), but music lessons are expensive and there’s the travel cost as well. There had to be a more efficient way and eventually her searching eyes fell on me and I was tasked to teach them music.

Like I said, I have seventeen years of experience playing the guitar, so I figured I was properly equipped for this job. And of course I chose the ukulele to teach them music.

Why not piano since it’s the “best” method for teaching kids? Mainly because they’re expensive and heavy. Have you ever tried to move a piano? If you have, you would know why there are so many free pianos (but you have to come get it) on Craigslist. In addition, you have the judgmental eyes of the piano teacher, sitting next to you on the bench close enough to touch clicking at every wrong note and saying over and over again “this wouldn’t happen if you just practiced more” – holy smoke Ms. Terry, I practiced! Just get off my case!

Also, piano is boring. It’s the very definition of stationary and when you add their inherent volume, I decided against it. Finally, our house is quite small and we just don’t have the space.

Why not guitar, then? Good question! There are certainly technical reasons: the scale is too long, the space between the frets too wide, the choice of notes too many, the weight too great, the straps too long, etc. etc. But the main reason I chose not to teach them the guitar (yet) is guitarists.

In the beginning there was one guitar and it was good. Then a second was made and instantly there came a bickering about which player was better. It’s in our nature as guitarists. I think it stems from all the practice, honestly. How could it not? You put in all this time and effort – it’s completely natural to want to show off.

And while there certainly are show-offs in the ukulele (uke) world, there’s more of a community atmosphere. I’ve heard stories of famous uke players going out of their way to visit schools and teach kids some lessons on the uke. I’ve heard tales of these same players just hanging out in parks or on the beach and if kids are walking by with their families and they want to watch masters perform, they’re more than welcome to. If the kids have ukes of their own, these same players will give them lessons. Even at ukulele festivals in Hawaii there are demonstrations from classes in schools who come up and play for the audience between sets of (way) more famous people.

Compare that to the guitar world.

Sources even say that in the UK they are replacing the recorder as the go-to musical education instrument with ukuleles. UK parents breathe a sigh of relief to have that nasty, nasal instrument retired.

I have my suspicions:  First, the sonic range of the ukulele is small and fairly high. When you play an uke that is tuned traditionally (with a high G) it sounds happy. There’s just no way around that. It’s hard to play something that sounds happy and stay mad.

But maybe it’s more than that. Maybe it’s the stigma of history. Where guitar has been known in just about any genre ever and your own taste dictates how you view the guitar’s history and that taste and history dictates the future uses you see, the ukulele has largely been associated with paradise. With a lack of troubles. With tropical waves lapping against sandy beaches and the sound of palm fronds rustling in the breeze. It’s very calming.

Meanwhile, with guitar you remember watching videos of James Hetfield beating his guitar with a machine-gun rhythm to aggressive metal, or SRV wailing away on blues – neither very happy things.

Regardless of the reason for the different atmosphere, it is mainly that atmosphere that dictated my choice. Also, they’re small and portable (take them anywhere and practice or write), they’re affordable (the ukes my kids want cost about $55 each and they are very well-reviewed), they’re able to be managed physically by small hands and arms, and the musical scale is fairly limited and therefore easy to navigate.

This isn’t to say guitars are bad or anything, but ukulele is certainly easier to learn and has a more friendly and encouraging atmosphere. It’s the bounce castle of musical education.

So why am I here on a guitar site? For one thing, we shouldn’t be so closed off that we would deny a new instrument just because it isn’t our primary one. All sorts of people use ukuleles as writing tools because of their portability and affordability. Also, the high G string really changes how you look at things and could open up doors to your song-writing. George Harrison bought a ton of ukuleles and stories have been told that he would bring two whenever he would fly places so he could jam with anyone he came across.

But mostly it’s because I’m a fan of this blog and Josh said I could write about ukuleles for it. I’m sure I’ll also bring some guitar odds and ends, but I mainly wanted to write about the ukulele, the instructional resources, ukes themselves, and the adventure of teaching it to my kids in case some of you would like to learn it or teach it to people you know.

So now that I have properly introduced myself and stated my purpose, I’ll close this article up. Even though I promised to go over courseware with you, next time I’ll be back with a review of the greatest ukulele (and possibly greatest music gear in general) store in the world that I found and was so excited about that I wanted to share. It’s going to be a good one, trust me.