Kevin Wagg, the owner of Ampendage Industries, contacted me several weeks ago to let me know about his line of amp stands. I’ve long thought about getting an amp stand, but I never really liked the ones that I saw in guitar stores. As a result, I’ve never really used one. Kevin was kind enough to send me a review unit, and I’m really impressed with what he’s building.

Ampendage offers three different models, two of which are solid hardwood and one is made of 3/4″ density MDF. As you can see below, the solid wood models look fantastic. The picture below shows the Teak model, which looks really nice in my music room; a Maple model is also available. The MDF stand has a black finish.

One of the nice things about amp stands is that they angle the speaker more towards your ear, which can be nice if you’re on a stage and want a more direct sound from your amp. I, however, don’t gig, but wanted a way to decouple the speaker from the floor. The angle of the stand pushes the sound right at my head, so I get a clearer picture of my tone.

Kevin advertises a small footprint with these stands, and I can agree. With a width of 14″ and a height of 12″, the amp stand stays out of the way enough to make it usable even in relatively small spaces. Yet, it’s also big enough to handle not only a 12″ combo, but my Mesa TA-15 lunchbox head/12″ cab configuration. I wouldn’t put a large head/cab configuration on the stand, but if you have a small one like the Mesa TA-15, I think a stand like this would work fine.

One downside of the Ampendage stands is that they don’t fold up like other stands. Kevin includes a built-in handle to make it easier to lug around. However, since the stand doesn’t fold up, carrying around the stand can be a bit of a hassle if you’ve got a bunch of other gear to carry.

The stand seems pretty durable, but I can’t attest to how gig-worthy it is. The pieces connect together well and are held together with some solid screws, so I would be surprised if it couldn’t stand up to most types of gigs.

If you’re looking for an amp stand, I think Ampendage is worth a look. Starting at $59.95 and going up to $89.95 for the solid wood models, they aren’t the cheapest stands around, but they are some of the nicest looking ones I’ve seen and seem to be solidly built. 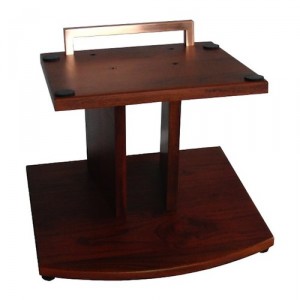