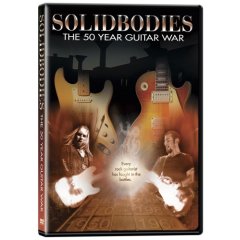 Solidbodies: The 50 Year Guitar War is a DVD by Guy Hornbuckle that chronicles the history of two of the earliest and most popular solidbody guitars: the Fender Stratocaster and the Gibson Les Paul. The DVD features interviews with some of today’s top guitarists including Joe Bonamassa, Derek Trucks, Henry Garza, Gary Hoey, and some great playing by Wes Jeans, John Roth, and Steve Selvidge. Additionally, the DVD features interviews with vintage guitar expert George Gruhn and author Richard R. Smith.

It’s obvious that Hornbuckle is a fan of the guitar. Both the Strat and Les Paul are given equal time with no real “war” being depicted other than the struggles of Fender and Gibson to become the dominant guitar manufacturer throughout the years.

The Fender story goes all the way back to when Leo Fender was repairing radios during the depression. It was interesting to find out how Fender was not really even a musician, he was just a great tinkerer and inventor. The Stratocaster was largely developed in collaboration with Fender’s employees, who were guitar players.

The Gibson story goes back to when Gibson was producing only acoustic and hollow-body guitars. I found it interesting to hear that there are two stories to how the Les Paul came about: the Les Paul story and the Ted McCarty story. Les Paul states that he went to Gibson with the idea for the Les Paul, while McCarty claims that Gibson went to Paul with a more or less finished guitar. It was also interesting to hear that during the 60s, the Les Paul was discontinued due to the agreement with Les Paul running out and not being continued. According to the movie, it was largely the result of British bluesmasters like Eric Clapton and Jeff Beck that re-sparked the interest in the Les Paul guitar. Of course, nowadays both Clapton and Beck are better known for playing Fenders than Gibsons, but they both were playing Gibsons in the 60s.

In addition to the great interviews, throughout the movie there are musical interludes and great soundtrack clips. After discussing the difference between humbuckers and single-coils, for instance, the viewer gets to actually hear the difference between the two types of pickups. At the end of the movie, Wes Jeans and Steve Selvidge play a very nice piece together with Jeans playing a Strat and Selvidge playing a Les Paul.

The DVD also features some special features: a slide show of the vintage guitars featured in the movie and a feature on vintage guitar values. These are a nice addition to the DVD; who doesn’t like looking at near-mint vintage guitars?

I really enjoyed watching this movie. You never know what to expect with a guitar documentary. Some are very cheesy. However, Solidbodies is a very well done movie. My wife, who is not a guitar player, even enjoyed watching this movie, which I consider to be a triumph since she rarely wants to watch any of my guitar-related movies. I think Guy Hornbuckle and Lightning Lab Productions have done a great job. If you like the guitar, I think you’ll like Solidbodies: The 50 Year Guitar War. You can watch a trailer for the movie at the Solidbodies Web site.