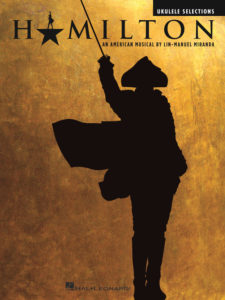 Aloha and welcome to a new series for ukulele instruction books! I know it’s going to be hard to surpass the quality of the last series (90s music), but I’m going to give it a shot:

There are songs that seem to have been with us forever. Songs that we seem to be born knowing. They’re the songs that bring us directly to a different place mentally and have the ability to get us excited, calm us down, or transport us to a different point in time. They’re the songs drenched in nostalgia because they’re passed down from generation to generation. But unlike, say, old folk songs, these songs don’t seem to age nearly as fast.

Of course I’m talking about music from film, TV, and musicals in general.

And I’ll begin with a new classic: Hamilton.

I don’t know if you’ve been alive for the last year or so, but Hamilton has taken the world by storm with a crazy fan base of people who had previously shown zero interest in Broadway or musicals, but these are the same people that are also buying tickets NINE MONTHS in advance and planning trips to fly to the Big Apple just to take in the show.

The musical is a fantastic interpretation of history that gets a lot of the details right (some are glossed over, some are skipped entirely, and years are blended into what seems like much shorter time period at points) and writer Lin-Manuel Miranda incorporated hip-hop themes to liven up what would have almost certainly been a bore to people who weren’t familiar with the insanely interesting life of Alexander Hamilton.

Side note: If you haven’t read the Ron Chernow biography of Hamilton, I can’t recommend it more highly. It’s intense, but interesting once you get past the introduction. No kidding – it’s a solid, solid book.

The musical is interesting as it takes themes used in songs and re-uses them in other places in other keys, meaning different things. The technique has a definite effect because the one or two measures where the trailing end of a melody is played and then replayed at a different point makes you FEEL a memory for the last time you heard it, but you’re unable to place it at that moment just as you would a feeling from your past if something triggered it just right – where it’s faint, but it’s definitely there.

Additionally, Miranda’s ear for music is STAGGERINGLY good. I told my wife (who was the person who introduced it to me) that it was like he had a firm grip on my heart and it would beat, lift, or break at his will from the music.

And the musical is all music. This is a good thing because a lot of musicals that have spoken words between the songs don’t include said spoken word in the CD of the production (meaning the copy of Book of Mormon you bought isn’t nearly as funny as the actual show – even though it’s still quite funny). The result is that anyone can listen to the Hamilton album and enjoy it in its entirety, just without the visuals.

Once you’re finished (thoroughly) enjoying the production, you can pick up your copy of Hal Leonard’s ukulele transcription!

We had listened to the show a TON in the car. It was all my wife would listen to for months and my kids started singing and rapping along as well. It was a blast and they wanted to do something creative with the music. My son and I recorded our own cover of “Wait For It,” based on someone’s interpretation of the song and, while great, I think I can do better.

So when I saw that Hamilton had a songbook released for piano, I hoped it was only a matter of time before it was released for ukulele and now here it is! And, yes, “Wait For It” is included.

Actually, the book does a pretty good job of including a bunch of the songs from the show. Ten songs made it into the book and you get the feeling that, if it had been more, the size of the book would have been unwieldy and the price expensive, but the ten songs cover an awful lot of ground when it comes to the show, each with different vibes, tempos, and intricacies.

Regarding music notation, the book features standard notation and chord boxes, but no TAB. That’s fine, because when it comes to this music, I prefer to sing along rather than try to infuse the chords with the vocal lines.

It’s affordable, too. With a list price of $16.99 for ten songs from a show where tickets go for… just… SO much money seems like a steal to me. And the quality is of a high level as well because now I can bring the music of Hamilton into my home in my way. At my speed.

I loved going through the book, knowing that the songs that my family all love to sing along with in the car can now be sung in the living room (or, better yet, taught to the kids so they could play it to themselves and get better at the ukulele) makes me genuinely happy. That’s what made me start thinking about this series. While Hamilton is very new (musical-wise), it’s obvious that it’s destined to be a classic and performed for ages similar (but far superior) to something like CATS.

You watch and see that I’m right: this is a show that will be passed down from generation to generation, the music seeping into the public consciousness.

Which made me think of the songs that I grew up listening to that was before my years and the songs that came out pretty early into my life that had the staying power that only comes from something like musicals. Soundtracks like The Wizard of Oz, Peanuts, Disney movies, and classic musicals from Rodgers & Hammerstein. These are songs that were either sung by my mom around the house or showed to me by her because she grew up loving them and wanted to share that love with me.

All of this, in turn, made me want to write a series on these often-overlooked, often-underrated pieces that get ignored because they weren’t performed by five guys in a band, but in the context of something larger.