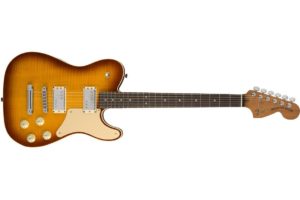 One of the anticipated releases being announced tomorrow is Fender’s Parallel Universe series. Basically, the series contains several guitars that combine features together to create something interesting. One of the more interesting to me is the Troublemaker Telecaster.

From the leaked picture, the Troublemaker Telecaster is basically a Les Paul in Tele form. It purportedly will have a mahogany body, maple top, two wide-range humbuckers, 22 frets, a mahogany neck and rosewood fretboard, and classic LP controls (2 volume, 2 tone, and 3-way toggle). The rumors are that it will have the traditional 25.5″ Fender scale. It’ll be interesting to see what actually gets announced tomorrow.