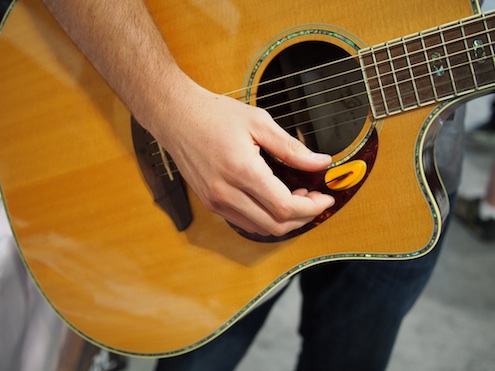 One of the interesting new products I saw at Summer NAMM this past week was a product by Hogjim called the Pik Tik:

Hogjim’s Pik Tik is a patented pick holder that allows a guitarist to seamlessly transition between fingerpicking and strumming.   The Pik Tik adheres to the guitar pick guard by suction, allowing a pick to be held perpendicular to the guitar’s surface.  Whether you insert the pick one millimeter or the full five millimeters, it will remain secure.  The Pik Tik can be removed after playing or remain on the guitar as a pick holder; either way it will not damage the surface.

With the ability to improve a guitarist’s skill set, the Pik Tik is both practical and functional.  It offers a quick and easy way to master the technique of transitioning from finger-style to flat-picking. This skill, which previously took years to master, can now be learned in a matter of days.

It’s an interesting concept that could prove to be very useful to players who frequently change between fingerpicking and playing with a pick. The device easily suctions onto a guitar’s pick guard and provides a place to put your pick when you want to play finger style.

The Pik Tik is normally $9.99, but they’re offering a NAMM show discount of 20% using the code NAMM2014 if you purchase directly from Hogjim.