You are here: Home / General / Home Recording on a Small Budget 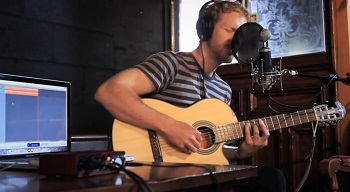 Ed. Note: This article is a guest post written by Alexander Briones who is one of the specialists at Hitsquad which provides a range of music equipment guides. You can follow him on Twitter @MusiciansNews

Thanks to the flood of affordable home recording equipment, making music at home has become increasingly accessible. So if you’ve been hesitating to record your music, the good news is that you can now do so on a small budget. The bad news is that there are so many available devices that it can be confusing, and this is where we come in to help by showing you how you can start recording music at home without over spending.

Computers play a critical role in home recording, it is where your music is going to be recorded, processed, stored and shared from. Since computers are becoming more affordable and are useful for both work and entertainment – it is getting easier to justify the need for such a device at home. If you don’t have one yet, you can acquire recording capable desktop or laptop computers for less than $500. The newer iPads are also gaining popularity among musicians and producers because they are capable of doing small scale recordings, so if you already have one you should know that aside from browsing social media sites and playing games – you can use it to record and make quality music.

To turn your computer into a music making machine, you will need a software designed for music production. Thankfully, there are now affordable and even free alternatives to expensive recording software that provides enough facilities for home recording purposes. GarageBand is a good example, and is bundled with newer Mac computers. Windows users can go for free software like Audacity that lets you record, apply effects and mix your recordings. If you are looking to add virtual instruments like drums or synths to your music, you can go for FL Studio producer which is currently being sold online for $199. iPad users can pick from a long list of affordable and free apps to record and make music with.

For affordable home recording setups, USB condenser microphones are ideal because they can be connected to your computer directly and they can capture both vocals and instruments. In fact, a computer and a good USB mic is already a capable recording rig for singers that play acoustic guitar! With so many manufacturers competing, you can get good USB mics for less than $80. One mic worth mentioning is the MXL 990 which comes with a free shock mount and mic stand adapter. Another popular and even more affordable mic is the Samson C01U, which has limited features but captures audio well enough to be used by many home recording artists and musicians. If you have an audio interface, you can use none-USB microphones that are specifically designed for vocals or for instruments.

Another important device that you need for home recording is an audio interface, it will serve as an intermediary between your microphone or instrument, and your computer. For less than $150, you can get yourself a powerful two channel audio interface like the Focusrite Scarlett 2i2. Two channel interfaces will let you capture up to two sound sources simultaneously, great for capturing live solo performances, and they have enough inputs for home recording setups. There are also a number of equally affordable audio interfaces that will let you connect your mic or instrument directly to your iPad, turning it into a mobile recording studio.

Even if you are strictly a guitar player, your home recording setup will benefit greatly when you add in a cheap MIDI keyboard. For less than $100, you can get yourself a compact but powerful MIDI keyboard that feature velocity-sensitive keys and pads. These units are great for adding virtual instruments to your tracks. The coolest and most stylish keyboard controller you can get within this price range would be the Arturia MiniLab, it comes with a powerful software companion that carries over 5000 synth sounds, more than enough to keep your creative juices flowing as you make music at home. You can find even cheaper options than this like the ones in this roundup of cheap MIDI controller keyboards.

The last but equally important piece that you need are decent monitoring headphones and speakers. Thankfully, good monitoring speakers now come cheap, a good example would be the Alesis M1, which is sold for less than $80 in the market. A good and yet affordable pair of studio headphones would be the AKG K141 MKII (retails for $117), it provides acceptable distortion free operation ideal for home recording. You should know that even professional studios have cheap monitor speakers and headphones because they give a closer representation of how your music will sound like in the real world, especially in this age where people mostly listen through thin sounding mobile players, car speakers and earphones.

The bottom line: making music is becoming more and more accessible, which means you have less and less excuse to not complete your music projects.