Elixir Strings let me know about a new series of strings that they designed in conjunction with Taylor Guitars, the HD Light set:

Powers felt he could achieve this articulation by creating a unique tension profile at the bridge that allowed greater articulation of the treble strings without overloading the soundboard. “We talked with our friends at Elixir Strings about how the tone of these body shapes could be enhanced by experimenting with string tension,” notes Powers.

The resulting Phosphor Bronze with NANOWEB® Coating set—known as HD Light—beautifully complements the construction of the Grand Concert and Grand Auditorium. “The increased tension of the treble strings improves their articulation, balancing their voice within the mix,” describes Elixir Strings Engineer Justin Fogleman. “What was unexpected is that the interaction of the tension profile with the soundboard also adds to the harmonic content of the bass strings creating a warmer, fuller sound. The articulation of the treble strings, while adding harmonic content at the bass end, provides a bold, well defined voice across all the strings, hence the name, HD Light.”

After experimenting with blending heavier medium gauge strings for the top three (treble) strings with the bass strings of regular light set, Fogleman adds that they found that the optimum gauging for the HD Light set to be .013, .017, .025, .032, .042 and .053.

“The new HD Light sets are perfect for these narrow body style guitars,” Powers adds. “The hand feel is incredibly balanced. Knowing that I was going to get to use this string set actually influenced the way I braced and voiced the guitars because I knew that they would create a unique tension profile.”

In tandem with the launch of the new string set, Taylor has officially announced that all of its most popular steel-string acoustic guitars are now being factory-strung with Elixir Phosphor Bronze Strings with NANOWEB Coating—including HD Light sets on the 300 to 800 Series Grand Concert and Grand Auditorium models—as Taylor’s recommended string of choice.

Offered in both Phosphor Bronze and 80/20 versions, Elixir Strings HD Light sets are now available for any acoustic guitar and priced at $15.99 and $14.99, respectively. 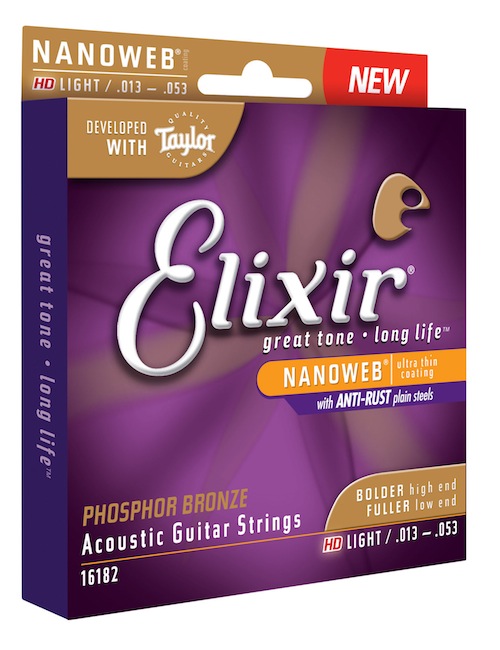