The Rat line of pedals have been popular for years, and it looks like ProCo is adding another new pedal to the line:

ANAHEIM, JANUARY 24, 2014 – RAT, an RHC Holdings Brand, is unveiling its new FAT RAT Guitar Pedal at the 2014 NAMM Show (Booth 4558). Building off the popularity and foundation of the original RAT Pedals, this new model is entirely built in the United States and features complete tonal flexibility through a choice of original or MOSFET clipping circuits.

The MOSFET clipping section in the new pedal provides a subtle smoothing in the upper mids and a more amp-like tone throughout the range of the RAT, without loss of the basic feel of the classic pedal. The new FAT RAT Pedal also features a bass enhancement that increases the bass response, which is perfect for bassists and guitar players who tune down their instruments.  The new pedal will now run on nine- to 18-volts of DC power, for users looking for the best headroom and audio fidelity.  Lastly, the FAT RAT also includes a socketed op-amp, which allows users to easily change between the stock OP07DP and other popular chips.

I’ve read some complaints about the size of the pedal and putting it on a pedalboard, but I suspect that if it sounds good those complaints will go away. 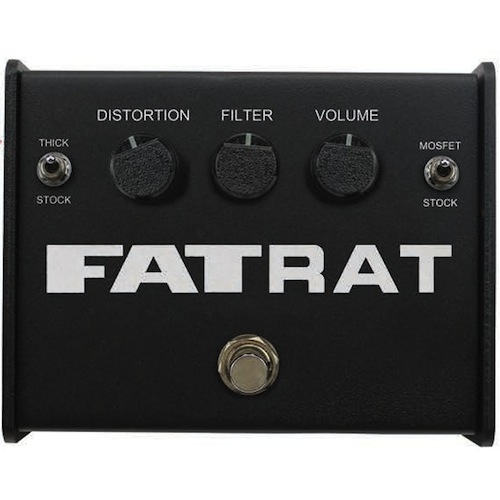