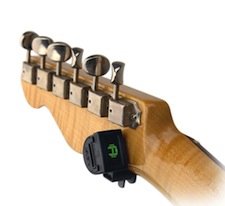 The folks at D’Addario/Planet Waves recently sent me a review unit of their NS Mini Headstock Tuner. Headstock tuners have become more popular over the past few years. I tried one made by a different company in the past and was not impressed. As a result, I was skeptical of the NS Mini Tuner. However, I’ve found the NS Mini Tuner to be a great blend of simplicity and accuracy, two things I value in any tuner regardless of size.

Before I go further into my impressions of the tuner, here’s a little information about it and what makes it different: The NS Mini Tuner uses a low profile design that fits easily on many headstocks and doesn’t stick out above the guitar. It uses a piezo pickup design that I’ve found to be very accurate. The display shows up as red when the string is out of tune and green when it is in or very nearly in tune. The note is framed when it is in tune. It can go from 430Hz to 450Hz, with 440Hz being the default. You can even change whether the display shows sharps or flats, which helps with an Eb-tuned guitar like I sometimes use. Trying to convert sharp notes to flat notes on the fly can lead to some confusion, and the ability to configure the display to show flat notes helps with this. Also, it clamps and releases from guitars very easily once you get the hang of the clamp. Another handy feature is the fact that the unit turns off after 10 minutes to help conserve the battery.

The most important thing that matters with any tuner is how accurate it is. To that end, I’ve found the NS Mini Headstock Tuner to be very accurate. It seems to be as accurate as any of my other tuners. I was a little concerned about how easily it would pick up the notes from my electric guitars, but my concerns were unfounded. It easily picks up the notes, and the display is clear and easy to follow.

You can’t review a headstock tuner and not talk about the size of the tuner. The head unit of the other tuner that I reviewed was large and stuck out from the headstock. By contrast, the NS Mini Tuner sits flush with the headstock and easily fits behind most headstocks, even smaller headstocks like those used on Fender Telecasters. Because it is so small and fits flush behind the headstock, the tuner can be left on when storing the guitar in the case or gig bag. The NS Mini is by far the lowest profile headstock tuner I’ve seen.

I’ve tried the tuner in a number of scenarios using several different guitars. As I’ve mentioned above, the tuner is really easy to use. You just clamp the tuner to the headstock, and you’re ready to go. Using the tuner while playing is as simple as hitting the power button and tuning away. Because the tuner shuts off after 10 minutes, you need not worry about turning it off before starting to play again.

I recently went on vacation and took one of my Strats with me. I decided to try taking the NS Mini Tuner as my only tuner. It worked great! The tuning was accurate, and it stored easily in my case and was ready whenever I needed it.

After spending some time with the tuner and using it in a variety of situations, I would recommend the NS Mini Headstock Tuner by D’Addario/Planet Waves to anyone looking for a small, easy to use headstock tuner. It’s particularly well-suited for Fender-style headstocks, but you can also use it on 3+3 headstocks with a little work to find the position that works best for you. The street price of the NS Mini Headstock Tuner is less than $20.

Check out the video below to see the tuner in action (notably with a Gibson-style 3+3 headstock):