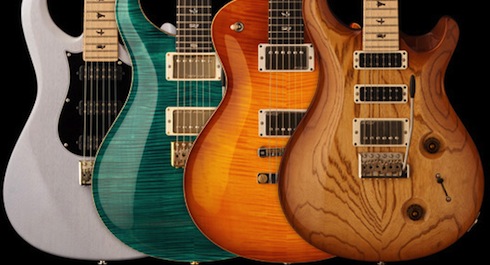 The Stripped 58 is a single-cut guitar that features a maple top and mahogany back, a 24.5″ scale length, 22 fret mahogany neck with rosewood fretboard and bird inlays, PRS Guitars’ new 2-piece bridge, 57/08 pickups, and their Pattern neck. PRS will be taking orders for the Stripped 58 from September 22, 2011 to October 14, 2011.

The Swamp Ash Studio is a variation of PRS Guitars’ Studio model featuring a swamp ash body and two 57/07 Narrowfield pickups and a 57/08 humbucking bridge pickup. Like the Stripped 58, the Swamp Ash Studio will be available between September 22, 2011 and October 14, 2011.

The Experience PRS 2011 Custom 24 is a limited edition guitar that features an artist grade top and matching headstock, black and white mother of pearl bird inlays, and 59/09 pickups. Only 200 Experience PRS 2011 Custom 24 guitars will be made and will be available in four colors: Burnt Almond, Faded Abalone, Gold Burst, and Orange Tiger. Only 50 guitars in each color will be made.