In October Favored Nations will be releasing the brand new Andy Timmons record “Andy Timmons Band Plays Sgt Pepper” which is a power trio rendition of the classic Beatles album which was done completely from Andy’s memory, without referencing the album while recording.

I had a chance to see Timmons do a clinic for Mesa last year, and he played a medley of tunes from this album. His arrangement of the songs sounded really good, so I’m looking forward to hearing the album. 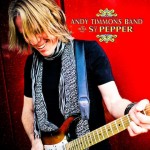