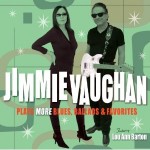 In a recent interview with Guitar World, Vaughan described his motivation for making a second album of covers:

What happened was, when I made the last one, I just never stopped. I thought, “Well, this is so much fun.” And these songs are really great to play on the gig. People love them and they swing, and it’s just great music, so I just kept going, finding more and more songs.