You are here: Home / General / Hendrix Mosaic Made From Picks

UK artist Ed Chapman created a mosaic of Jimi Hendrix out of picks that was recently sold to raise £23,000 for Cancer research:

“Jimi Hendrix is a guitar maestro and nobody played a Fender guitar like him,” said Chapman, who has earned a reputation of his own for bringing a contemporary twist to an ancient medium. ”I decided to use plectrums to create a portrait of him because I like experimenting with different materials and textures and I think it is a fitting tribute to the musician.” 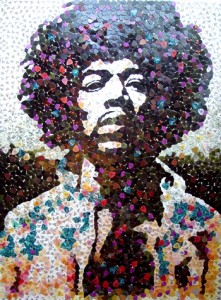