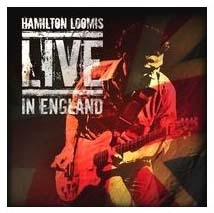 I recently had the opportunity to ask guitarist Hamilton Loomis a few questions. If you’re not familiar with Loomis, he is a Texas-based guitarist who plays a mixture of blues, rock, funk, and soul-influenced music. His most recent album is a live album called Live in England.

Loomis has the distinction of being given a Gretsch Bo Diddley guitar directly from Bo Diddley himself, who took Loomis under his wing at an early age. In the interview, Loomis discusses how he met Diddley and how he developed his approach to the blues.

What kind of gear are you using on the live album? Guitars, amps effects?

On the Live In England CD, I used my Ernie Ball Music Man Axis Super Sport, equipped with an MM-90 neck pickup (similar to P-90) and DiMarzio DLX Soapbar Bridge Humbucker. The overdrive is a Barber Small Fry, and for the occasional Leslie sound, that’s a re-housed Arion SCH-1. The amp is a Fender Blues Deluxe, provided by my friend Dave Richardson from Essex. The rhythm guitar you occasionally hear is me looping on the fly, nothing pre-recorded, with my trusty Akai Headrush E2. For the Bo Diddley tribute, that’s my Gretsch Bo Diddley Signature model, equipped with GFS Fat 90 humbucker sized single-coils. The tremolo is a Voodoo Labs Tremolo pedal. Since the CD, I’ve acquired a 25th Anniversary Music Man (with the series/parallel switching), and I’m using it exclusively now. I’ve been with Music Man for 2 years now, and they are the best guitars on the market for feel, tone, ergonomics, and beauty as well!

How did you get to know Bo Diddley, and what’s the story behind Diddley giving you the square red guitar?

I met Bo in Houston in 1992 at one of his shows. I went backstage to get an autograph on my guitar case, and I played for him while I was there. The next set, he saw me in the front row and invited me to play a song…It was unbelievable! We kept in touch and became friends. We did shows together in the Texas Gulf Coast for many years. I’ve learned so much from him, and I’m honored to have called him my friend.

About 10 years ago, we were talking on the phone and he mentioned that Gretsch finally came out with the Bo Diddley Signature model guitar. I told him congratulations, and out of the blue, he said “I’ll get them to send you one”. I thanked him for the gesture, but I didn’t really expect anything since he talked often to thousands people, not to mention celebrities. A week later, it showed up at my door, and it’s been one of my prized possessions ever since. He signed it the next time I saw him, which made it even more special.

How did you get started playing guitar, specifically the blues?

Both my parents are musicians, and they had the most fantastic record collection full of blues, soul, R&B, rock, pop, and funk. The combination of instruments lying around the house and records playing non-stop caused me to pick up music really quickly. I learned from old records by Freddy King, Gatemouth Brown, and BB King, but also from the soul of Otis Redding, Sam & Dave, Stevie Wonder. When I was a teenager, my folks regularly took me to a blues jam hosted by Joe “Guitar” Hughes, who grew up with Albert Collins and Johnny “Clyde” Copeland. He not only taught me about playing guitar, but playing with other musicians. That blues “education” combined with all the other music I listened to made me the musician I am today, or at least what I strive to be.

Tell me about your technique?

I have a specific approach to guitar playing, especially rhythm guitar. I use as few notes as possible to make chords, and I rarely ever play chords with 5 or 6 strings. I also rarely play the root of any chord, since I always play with a bass player. I like 2 and 3 note chords, and I like the open-ness and space that results. This all came about when I burned my left index finger on a plate of Mexican food and got a bad blister. The thought of not being able to play disturbed me, and I wasn’t about to cancel a show because of one finger. I experimented with making chords with the other 3 fingers, and it forced me to explore other voicings and find only the important (or necessary) notes in chords, like the 3rd and 7th. I discovered you don’t need the root of a chord if the bass is already playing it. Ever since then I’ve enjoyed the more uncluttered sound, the economy that results since your fingers and wrist don’t have to work as hard, and the peace of mind knowing I can do a whole show with 3 fingers…Django did it with only 2.

Who are your primary influences?

Apart from my aforementioned influences, Bo Diddley influenced my stylistically. He encouraged me to be original. He said “Innovate, don’t imitate”, which meant a lot coming from an artist who never sounded like anyone. My music is difficult to categorize, and it bothers me that artists are always categorized or labeled. Whatever your style is, if you’re on a major label they can just put you in the biggest category, or the one with the most visibility in stores, or the one that is accessible to the widest range of people. People say to me all the time, “I love your music, but what do you call it? Is it blues? Is it R&B? Is it rock?” I reply, “Does it matter? I’m just glad you love it.”