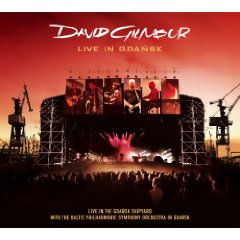 Last week, I met some friends at a local movie theater for a showing of David Gilmour’s Live at Gdansk DVD. I’ve been on a bit of a David Gilmour kick over the past few weeks, and I’ve recently watched Gilmour’s Remember That Night – Live at Royal Albert Hall and Pink Floyd’s Pulse. So, I was pretty pumped to see this new DVD.

Much like the Live at Royal Albert Hall DVD, the Live at Gdansk DVD includes many great Pink Floyd hits, as well as performances of songs from Gilmour’s latest album On an Island. In addition to Gilmour’s touring band, the DVD features the Baltic Philharmonic Symphony Orchestra, which adds an interesting touch to the music.

Overall, I thought this was a very good concert recording. Gilmour, as always, is great, and the band is also very good. However, having recently seen Remember That Night – Live at Royal Albert Hall, I can’t help but compare the two DVDs, and the Royal Albert Hall concert was better, in my opinion.

That being said, I still really enjoyed the Live at Gdansk show and would recommend it to any fan of Pink Floyd and David Gilmour. However, if you haven’t seen Remember that Night – Live at Royal Albert Hall, I would recommend getting that DVD first.