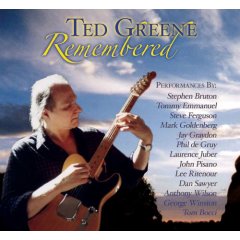 A few months ago, Tom Bocci sent me a review copy of Ted Greene Remembered, a musical tribute to guitarist Ted Greene. Truth be told, I hadn’t heard of Ted Greene prior to receiving the CD. However, it became clear with a little research that Ted was a well-respected guitarist and teacher with many fans.

Proceeds from the sale of the CD will help support the TedGreene.com Web site, which will allow future students to benefit from Mr. Greene’s teachings.