You are here: Home / Reviews / Lenny Kravitz – It Is Time For A Love Revolution 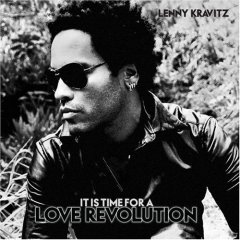 I recently picked up It Is Time For A Love Revolution by Lenny Kravitz, and so far I’ve been very impressed. I think it’s the best album he’s put out so far.

I recently read that other than a few guitar solos and the saxophone parts, Kravitz played all of the instruments on the album. Apparently, he’s done this for all of his albums, but I’d never heard about it until recently. Very impressive!

Like all of Kravitz’s other albums, this latest album melds classic rock from the 60s and 70s with funk and modern rock. Some people criticize Kravitz for being too much of a throw back, but I personally dig it. Sometimes, it can become a little tired, but It is Time For A Love Revolution breaks through and remains fresh throughout the entire album.

The album is funky, rocking, and laid back all at the same time; an excellent blend of the old and the new. If you’ve enjoyed any of Kravitz’s music in the past, then you’ll like It Is Time For A Love Revolution. If you’ve never been a fan, then maybe this latest album will change your mind. I’ve really been enjoying it over the past few weeks.