You are here: Home / Beginners / It’s the Song, Stupid

For example, I was listening to some music the other day, and while the guitarist was playing great licks, there wasn’t a whole lot of music being played. There was no real song to back up the guitar playing; it was just a lot of wanking around. As a guitarist, it’s easy to get caught up in trying to master all of the scales and chords and playing fast licks, but our job is generally to play and support songs. That’s right. Songs, those pesky interludes between guitar solos.

Jimmy Page was an excellent guitarist, but he’s more well known to the general listening audience for creating and playing great songs. The same is true for Eric Clapton, one of the greatest guitarists to ever pick up the instrument. But, Clapton is also a great songwriter. In fact, I would argue that most of the best known guitarists are well known not only because of their guitar playing skills, but their songwriting skills, as well.

So, this weekend when you’re greasing up your frets so that you can play that legato lick at 160 BPM instead of 150, don’t forget to work on your compositional skills, too. You’ll gain a better understanding of the instrument, and you’ll probably become a better musician as a result. If you ever forget why you’re playing the guitar, remember “It’s the song, stupid.” 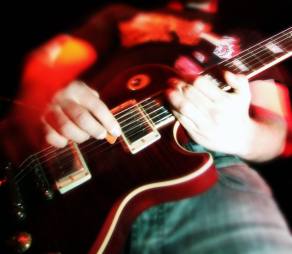