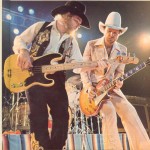 Check out this early photo of ZZ Top's Billy Gibbons and Dusty Hill: Photo Credit: Based on my research, this photo appeared in Circus Magazine in September of 1975. … END_OF_DOCUMENT_TOKEN_TO_BE_REPLACED

I can't believe this fell under my radar, but last week ZZ Top released a two-DVD set titled Double Down Live. This two-disc set includes shows from almost 20 years apart. The first DVD includes 22 songs recorded in 1980, during the Top's Deguello tour. The second DVD includes 11 songs recorded during their 2008 tour. Also included on the second DVD is behind the scenes footage … END_OF_DOCUMENT_TOKEN_TO_BE_REPLACED

ZZ Top has recently signed to American Recordings for their next album, which will be produced by Rick Rubin. Rubin's been awfully busy lately producing Metallica's next album, Jakob Dylan's new album and now ZZ Top's next album: The veteran rock trio is planning to hit the studio with Rubin producing, for an album more in keeping with "La Grange"-era ZZ Top than its … END_OF_DOCUMENT_TOKEN_TO_BE_REPLACED