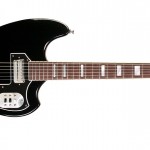 I haven't reported much from this year's Summer NAMM show, but Guild reintroduced an interesting guitar: the S-200 T-Bird: Guild is pleased to announce the highly anticipated reintroduction of one of its most iconic, uniquely recognizable guitars: the S-200 T-Bird. This reissue is a replica of the original versions produced between 1964 and 1968, featuring an … END_OF_DOCUMENT_TOKEN_TO_BE_REPLACED