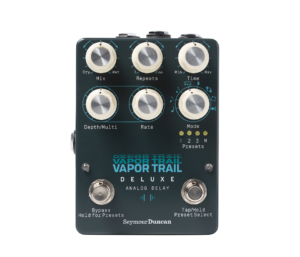 Today, Seymour Duncan are releasing the Vapor Trail Deluxe, which as its name implies is a deluxe version of their Vapor Trail delay pedal.

I haven’t played the original Vapor Trail pedal yet, but the reviews are generally pretty positive. This new version looks like a great upgrade to the pedal, and I’m interested in checking it out, as I’ve never found a delay pedal that I’ve held onto for very long and this one looks like it has some great features.

Here’s a video from Seymour Duncan introducing the pedal:

Here is their press release for the pedal:

100% Analog, Bucket Brigade Tone
The Vapor Trail Deluxe offers 100% analog warmth and character. And with four of the largest Bucket Brigade chips in production, it delivers enhanced tone and increased delay times up to 1.2 seconds. Those chips are also responsible for the pedal’s modulation that goes from a subtle shimmer to rotary speaker-like warble with ease.

Total Control
We worked hard to give the Vapor Trail Deluxe an inspiring analog tone. But we were just getting started. We’ve also outfitted the pedal with tap tempo with subdivisions, expression pedal control, and delay tails on/off options for letting your repeats carry over. And once you’ve dialed in your perfect repeats, you can store them for on the fly recall in one of three preset locations.

Limitless Ambient Inspiration
The Vapor Trail Deluxe is also the perfect platform for ambient sonic exploration. First, we carried over the original’s Wet Insert for adding your own outboard effects to the repeated signal. Then we added four new modes that push the boundaries of ambient delay tones.