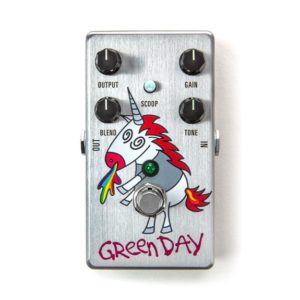 Last year, Dunlop/MXR collaborated with Green Day’s Billie Joe Armstrong to create the Dookie Drive, which is meant to recreate the two Marshall sound from the Dookie album. At this year’s NAMM show, MXR have announced the latest version of the pedal (v3) with updated artwork to reflect Green Day’s upcoming Father of All… album:

Billie Joe Armstrong’s guitar tone on Green Day’s groundbreaking album Dookie sounded dirty and punchy with the perfect amount of articulation to express the musicality of his fast, melodic riffs. He got that sound by running his signal through two heavily modified amplifiers—one scooped with a ton of gain and the other with a well-defined midrange. When it came time to mix the record, the band blended the two signals together in different ratios to match the vibe of each track.

The MXR Dookie Drive Pedal captures the sound of both the amps used on that record in a single pedal so that you can dial in your own variations of the famous Dookie sound. We borrowed the amps themselves so that the MXR team could carefully analyze all the sonic qualities that make them sound so darn good. After much analysis and A/B testing, our engineers rebuilt the amps from scratch in pedal circuit form and fit them into a single housing. The High Gain and Crunch Gain sections each have their own controls, while the Blend control allows you to mix them together just like Green Day did in the studio. If you want some extra scoop in the midrange of the overall output signal, just hit the Scoop switch.

The Dookie Drive isn’t just for Green Day fans—this totally unique pedal provides a full harmonic range of overdriven tones for a playing experience that is full of depth and dimension. To celebrate the launch of Green Day’s eclectic thirteenth studio album “Father of All…”, this special limited edition version of the pedal features the album cover’s rainbow-upchucking unicorn over a brushed aluminum housing. In the words of Billie Joe: “Nothing says f*** you like a unicorn.”

The primary different between the versions is the artwork. My favorite was the first version with the Dookie album artwork: 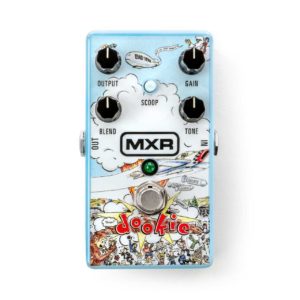 I realize that the intent with the new artwork is to promote the new album, but I’d like to see them go back to the Dookie artwork since the pedal is ostensibly all about that album.