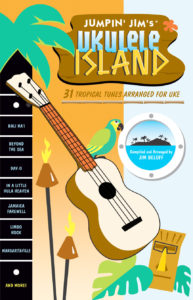 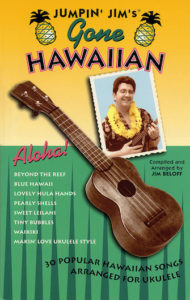 Do you know what I love?

It’s strange that the ukulele has become a Hawaiian instrument, considering that it was a Portuguese instrument first, but it’s a happy incident in my mind. And I love Hawaiian music, too. There’s a calming magic to the yodel often associated with it.

That’s why I ordered a bunch of Hawaiian-themed ukulele books from Hal Leonard and am here to review them.

Let’s start this series with two books: Jumpin’ Jim’s Ukulele Island and Jumpin’ Jim’s Gone Hawaiian. They’re sold separately, but I think they go very well together and, for about $30.00 you can’t go wrong.

If you get both books, you get 61 songs to choose from and there’s a ton of variety inside! They’re similar in a few aspects as they are curated by the same arranger (Jim Beloff), they’re the same physical size, they both feature standard notation and chord boxes (no TAB) and they both present excellent value for the money.

The thing you have to understand, though, is that they’re both more island-themed than genuinely Hawaiian. I think it’s more like the idea of Hawaii (and tropical islands in general) inspired the songs rather than the actual catalog of traditional Hawaiian songs.

Not that that’s a bad thing. I always try to look at music through the lens of how much it would be enjoyed by an audience and it seems like you would have more success playing songs like “Day-O (the Banana Boat Song),” “Brown Eyed Girl,” “Don’t Worry, Be Happy,” and “Margaritaville,” than you would, say, “Hanohano Hanalei.”

And all of those songs and more can be found in Ukulele Island.

Prefer songs more on-the-nose when it comes to “Hawaii?” Check out Gone Hawaiian! For one thing, the back of the book clearly states how to pronounce “ukulele,” for people who insist on pronouncing it “you-kah-lay-lee.”

For another thing, the book is chock-full of words that are fun to sing. Have you ever heard “My Little Grass Shack in Kealakekua, Hawaii?” It’s a fantastic song in general, but I have NEVER seen anyone NOT smile the first time that title gets sung in the song. I certainly don’t mean to sound like I’m making fun of Hawaii in anyway, but the song has a rhythm to it with the words and it gets thrown out the window with such a long word as “Kealakekua.” You can almost see people wonder when the place’s name is going to end. It’s great.

Also, and I’m sure this is just me, but I love songs mentioning places that I’ve been to and love. “Royal Hawaiian Hotel,” “On the Beach at Waikiki,” “My Honolulu Hula Girl,” etc all have a charm about them. The only way this book’s collection of songs could get any better is if they included “Haole Hula,” which sounds like a fun little song, but has questionably depressing lyrics (similar to “Over the Rainbow”).

But in general, both of these books are solid purchases if you’re looking for the carefree island vibe (Ukulele Island) or if you want to sing about Hawaii specifically (Gone Hawaiian) and they make fantastic companion pieces to each other. Beloff did a fantastic job curating and arranging these songs and they’re a fantastic value for any player looking to expand their repertoire with tropical sing-alongs.