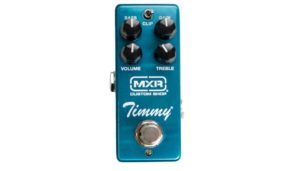 Paul Cochrane, who created the legendary Timmy pedal, has collaborated with the MXR Custom Shop to create a mini version of the Timmy pedal. The original Timmy pedal housing is a little smaller than a “normal” pedal, so I think the real advantage of the MXR version is the fact that it’ll be readily available. Paul runs a small shop here in Tennessee and is the main (only?) builder of the Timmy pedals, and as a result his production output is inconsistent.

Paul has stated that the MXR version is based off of his v2 Timmy version. I’ve owned both a v2 and one of his newly released v3 versions, and I prefer the v2 version as it has a few more options. It does have less gain than v3, however, if that’s a factor for you.

If you’re not familiar with the Timmy, it’s a transparent overdrive with three clipping options. It doesn’t color your tone the way most overdrives and distortions do. It just takes your tone and adds a boost with whatever amount of grit you dial in on the pedal.

Musician’s Friend is currently taking pre-orders at a street price of $129.99 with a delivery date of mid-February.