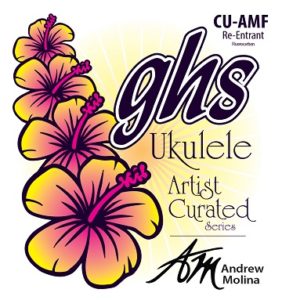 Aloha! Before I moved to Hawaii, I knew I was going to be buying an ukulele for me at least, but was trying to get the kids interested in it as well. I found a video of an amazing player tackling Taylor Swift’s “Shake it Off,” and my daughter, a huge Swift fan, was intrigued.

I was more interested in the player, though. Andrew Molina is amazing. He’s got that infuriating combination of making music that sounds very difficult to play while looking like it’s the easiest thing in the world for him. That combination makes you feel a mix of inspiration and hopelessness.

Over the last couple of years, I’ve seen more of Molina’s videos and my favorite to date is “Surfing Jaws.”

It’s got that same combination of skill and an easy look, but melody is so solid and unrelenting that you could hum the whole thing. While there’s a ton of virtuosity on display, the song never takes a back seat to the melody and that’s why it’s so strong. In short, it’s the perfect instrumental. I love it.

So, as a fan of Molina’s, I was pleased to see a string set from GHS curated by Molina. I asked for a review set and, when they arrived, strung up one of my tenors and had some impressions.

The first was that they don’t magically make you better. That being said, there are some attributes to them that, over time, will make it easier to get better.

The first is that they’re made slightly thinner than average strings, but with greater tension. The result is a strong, punchy tone that doesn’t sound muffled or boomy like some ukulele strings do.

The second is that, with that added tension, there’s a little more force involved with fretting them (and a slightly better chance of making notes go sharp) but that’s okay because added tension reduces the amount of distance a string will travel when plucked/strummed/picked. The result of this is a lower likelihood of the string hitting the frets above your fretted note and creating a buzz. Because of this, you can lower the action on your uke and use less force to press down on the strings.

So, basically, you would only have to exert slightly more effort if you kept the action on your ukulele high, which is no longer a necessity.

Additionally, with the greater tension and less string travel, the strings snap back to where they should be faster and it doesn’t take long at all to appreciate that fact as your fingers know exactly where to go to pick the next note. This is hugely beneficial when tremolo-picking in particular.

With strings that go back to where they should faster, and the lower travel space/time giving you the opportunity to lower your ukulele action and make playing easier, it’s easy to see that, while they won’t magically make you a better player, they’ll give you some added features that will make playing a little easier, which will only benefit you in the long run.

I think this string set is a good investment in experimentation. I say buy a set, throw them on your ukulele and see what I mean. You don’t need to adjust your action or anything to get a feel and appreciate them for their tone and playing potential.