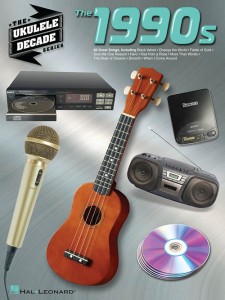 Aloha! Let’s say that, for some CRAZY reason, you’ve never heard any music from the 1990 but because people love it so much, or request it so often, or reference it in some way, you’re looking for a crash course in it.

Or, alternatively, you’re a sucker for 1990s music and want a treasure trove of offerings from the decade.

Either way, The 1990s (from The Ukulele Decade Series) is the book for you. It’s a pretty massive tome of 80 songs with chord boxes, musical notations, and verses written out. It’s a full-size music book with about 312 pages of music and, because of this, it’s a little cumbersome. But once you get over the fact that it’s not meant to be traveled with but rather used to pull individual songs from to learn, the content really shines.

The music included is just about everything you could love from the 1990s when it comes to instrumentation. It’s got early 90s cheese (“I’d Do Anything for Love (But I Won’t Do That)”) to meaningful alternative (“Runaway Train”), odd-duck music that would have a tough time surviving in any other decade (“Santeria”), one-hit wonders (“She’s So High,” “Sex and Candy”), to songs from movies (“My Heart Will Go On”).

While Meatloaf would be an interesting pick for ukulele, most of the songs in the book seem like a natural fit and be fun to play – especially for someone who’s really into the decade. If you think about all the different offerings from all the different genres and sub-genres, you could use this book alone and put together a pretty interesting show with enough variety to be plenty interesting and enough of a theme to be fun.

Personally, this is one of the first uke books that I ever wanted. I thought that it was awesome to take a greatest-hits approach to a music book, and this one fits me so perfectly that I couldn’t NOT enjoy it. It’s my desert-island music book – the one book that I would grab and bring along if I knew it was going to be the only uke book I could have because it’s more than just the song count, it’s the quality of those songs and how much they mean to me. This book is the soundtrack to my childhood and the songs mean a lot to me. I’m sure we all feel the same way about the music we grew up with (even if you didn’t grow up in the 90s) so it’s nice to have so many fantastic songs to pull from.

And with a list price of $22.99 (and a cheaper street price), it’s a steal. I think that, as my daughter gets a better grip on the ukulele, she’ll be looking to learn some of the songs she grew up with me singing and playing to her and this is going to be appreciated like crazy. True, it doesn’t have TAB or CDs you can play along with, but I think the quantity and quality of songs makes up for it.

Overall, I couldn’t recommend it more.

You can buy direct from Hal Leonard, from Amazon, or from you favorite book store.

Until next time!
Mahalo!
-Russ