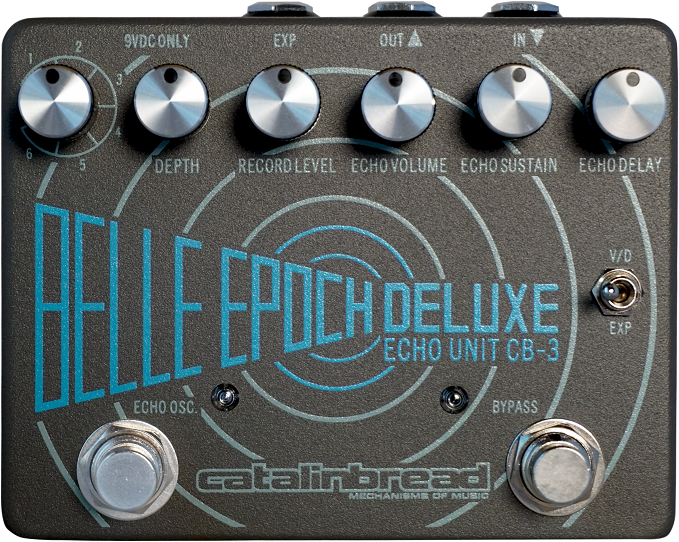 Introduced a number of months ago, Catalinbread has finally released the Belle Epoch Deluxe, an updated version of their Belle Epoch pedal.

The first units sold out almost immediately from Pro Guitar Shop, so it looks like they’re still backordered at the moment. Here’s PGS’s description of the pedal:

The original Belle Epoch was, to put it bluntly, a triumph. It was an all-digital recreation of the Maestro Echoplex that sounded, by and large, like the original unit. But it was digital! Gasp! How can that be? Well, noted tone snob Eric Johnson had not one, but two on his board, set slightly differently. If it’s good enough for EJ, it’s good enough for just about anybody, and so it was.

However, there’s still some room for improvement: How about that legendary preamp that exists within the Echoplex? How about the original’s odd operating voltage of 22 volts? What about an expression pedal? Well, friends, your prayers have been answered in the form of the Belle Epoch Deluxe.

Starting with the Echo Program control, you’re presented with six individual modes. Mode 1 is the stock EP-3 setting, but there’s so much more. Modes 2 through 6 give you a dark analog delay, rotary-speaker affected repeats, resonant filtered repeats, and two separate Deluxe Memory Man settings with different modulation effects on each mode. Each mode has a specific function that is controlled by the Depth knob, as well as one that is controlled by expression pedal when the toggle is set to the left.

The Delay Time ranges from 80 to 800 milliseconds, just like a real EP-3. And in the quest for EP-3 authenticity, not a detail was spared. The preamp of the Belle Epoch Deluxe is no slouch. Everyone knows that the Echoplex preamp makes up half the magic, and it’s all here, using high-quality parts and the original 22-volt operating voltage for real EP-3 preamp tones with no corners cut. The Record Level control on the front adjusts the heat of this preamp.

No special adapters are needed to convert the voltage to 22, it’s all taken care of by the internal circuitry. Just plug in your standard nine volts and away you go. Have an expression pedal? The V/D toggle on the front changes whether or not it controls the Delay Time control, or the special function outlined on each mode. Want true bypass or trails? How about both? A special slide switch on the inside lets you choose.

An internal trimpot lets you set the oscillation rate, for use with the Echo Osc[illation] footswitch on the front. Holding this switch down lets the repeats run away for some expressive blasts of feedback that really show off the tone of the Belle Epoch Deluxe.

I owned the original Belle Epoch and really liked it. I don’t use much delay, so I sold it, but this has piqued my interest.

The pedal retails for $329.99 and hopefully a second batch will be produced soon.