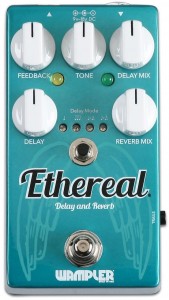 Wampler first announced the Ethereal pedal at last year’s winter NAMM show. Brian Wampler wasn’t fully satisfied with the pedal at that point, and he spent the last year and a half refining the pedal to where he was satisfied. And now, Wampler have official released the Ethereal for sale.

So, what is the Ethereal? Here’s how Wampler describes it:

How many times have you sat in front of your favorite ambient pedal and felt like you need weeks of training at NASA to use it? Knobs, switches, sliders…It’s often SO hard and frustrating to find a usable tone on those things quickly… Keeping that firmly in mind, when we first considered making an ambient pedal, ease of use was a top priority, right up there with top tier quality tone on par with pedals at twice the price.

Put more simply, it’s a combination reverb and delay pedal. Obviously, they’re marketing it towards ambient tones and players, but based on the demos, it could also work as a stand-alone reverb or delay pedal.

I don’t really play in an ambient style, but if you do, this looks like a pedal to look at.