You are here: Home / Reviews / Review: Billy Joel for Ukulele 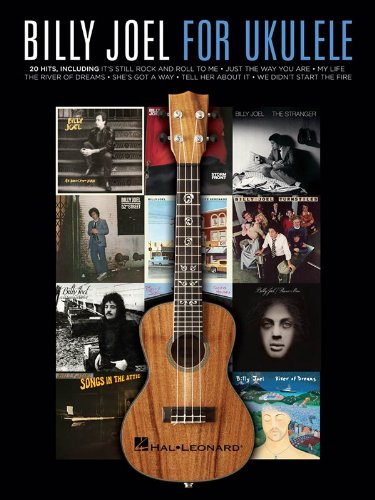 Aloha! One of my favorite things about the ukulele is its ability to play almost any genre of music (hard rock and metal notwithstanding – at least not to me) and turn it into something new, but still pleasurable. Take Billy Joel, for instance: the piano man has largely been behind the… well… the piano for his career, but his songs are so well-written and transcendent that you can twist them into other forms on other instruments and it STILL sounds good.

Especially on the ukulele.

Hal Leonard has released Billy Joel for Ukulele, and it is a fantastic greatest-hits approach to Joel’s catalog. It doesn’t feature TAB, but it does feature chords (and even chord boxes, which is a fun bonus) for the strummers as well as musical notation.

I’ve been looking forward to getting this book for a while. The River of Dreams album is on my Top 5 Front To Back Albums of all time because every single song is great, but some are greater than others and those (particularly the two songs “River of Dreams,” and “Lullabye (Goodnight, My Angel”)) are included in this book next to usual suspects like “Uptown Girl,” “Piano Man,” and “We Didn’t Start The Fire.” Some of the songs are very easy and feature few chords, but some of them feature a great deal of changes, adding a lot of complexity (and awesomeness) to your performance.

While I admit that Billy Joel isn’t the first person you may think of when you think “ukulele,” it does still fit and by learning songs that were written for a radically different context, you can start to figure out different approaches to your own music based on the success of certain chord structures that you’ve learned along the way. It’s like the major pentatonic scale on guitar: Yes, everyone uses it and it’s generally accepted as the way to go, but when you hear the minor pentatonic scale your ears kind-of perk up and you’re more interested. Music is no different than food and when you’re eating the same thing all the time food gets boring.

And if you’re listening and playing the same stuff all the time, music gets boring and (worse) your writing reflects it, if you can motivate yourself to write at all. But when you start to branch out into unfamiliar territory, you can return with new tricks or points of view that make your interest in music alive again and your writing more gripping to the audience. I’m not saying you have to completely change yourself, but you can always be better and more varied.

So by learning something that sounds good on the ukulele but is from an area that isn’t normally associated with the instrument, you can gain some valuable lessons and I think there’s no better person to teach these lessons than Billy Joel (who’s awesome).

The songs included are:

And So It Goes
Don’t Ask Me Why
The Entertainer
Honesty
It’s Still Rock And Roll To Me
Just The Way You Are
Leave a Tender Moment Alone
The Longest Time
Lullabye (Goodnight, My Angel)
My Life
New York State of Mind
Only The Good Die Young
Piano Man
The River of Dreams
She’s Always A Woman
She’s Got A Way
Tell Her About It
Uptown Girl
We Didn’t Start The Fire
You May Be Right

You can buy the book directly from Hal Leonard, Amazon, or your favorite book store.