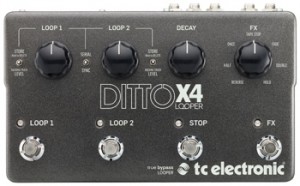 TC Electronic has announced a new version of their Ditto Looper called the Ditto X4 Looper:

Ditto X4 Looper is the pedal that’ll let you turn a single moment in time into something truly spectacular. By perfectly merging ease of use with stellar creative features like dual loop tracks, 7 loop FX, loop decay and MIDI sync, Ditto X4 Looper will instantly become the canvas on which you paint your multi-layered sonic masterpieces. If you can dream it, you can loop it!

Here’s a demo video from TC Electronic for the new looper: