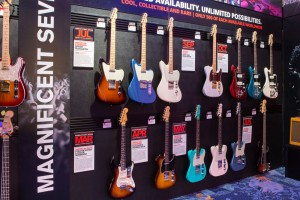 Fender has announced a new series of guitars that will be released throughout 2016. They’re calling the new series the Magnificent Seven:

Debuting at the 2016 NAMM Show in Anaheim, Calif., Fender is set to release the Magnificent Seven collection, a limited-edition package of seven guitars from the minds of Fender’s innovative designers and builders.

Included in the grouping is a Fender Select Lite Ash Telecaster, a blinged-out version of the classic model with gold hardware, a tortoiseshell pickguard and White Blonde lacquer finish. Amazingly, each one of the Lite Ash Telecasters weighs in at seven pounds or less.

Another Magnificent Seven offering is a sleek offset Telecaster, which marries the curves of a Jazzmaster body with a Telecaster neck, pickups and hardware, marking the best of both worlds in this hybrid design.

The Magnificent Seven also includes an American Special Jazzmaster Bigsby, which loads a Bigsby licensed B50 vibrato tailpiece to the standard Jazzmaster bridge, adding another level to the guitar’s capabilities.

“A lot of these were previously only done in the Custom Shop,” said Fender Vice President of Product Development Justin Norvell. “It’s kind of a playground, if you will … A sandbox of inspiration. There’s not a lot new under the sun when it comes to the electric guitar because people have been playing ones that look like they’re from the ‘50s for the last 60-70 years, so these are interesting for people who already have those.

“We usually have always had a lot of limited editions but didn’t necessarily put them together in a series. We’re excited that everybody gets to see this array of wild ideas and pick the one that they like.”

Looks like an interesting collection of guitars. As they say, some of these have already been done, but only in the Custom Shop. For example, the offset Telecaster was previously released as the Telemaster and has been copied by numerous other builders.

New guitars in the series will be released each month this year from March through October (skipping August for some reason). Only 500 of each model will be produced.