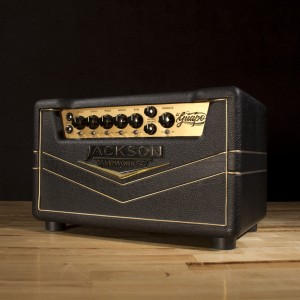 Boutique amplifier company Jackson Ampworks has just released their version of the venerable 100 watt Plexi which they call the El Guapo:

The El Guapo (it uses EL-34 tubes) is a collaboration between Jackson Ampworks and one of the greatest blues guitarists of our time: Josh Smith. Josh approached us a few months ago asking if we had any interest in making a 100W Super Bass with a Super Lead voiced High Gain second channel. As it turns out, I was about to start working on a 100W Super Bass design so the timing was perfect for our collaboration on this amp.

Josh and I are both huge fans of the early 100W Super Bass circuit (it’s my favorite of all the Plexi’s) so when we first started brainstorming ideas for the El Guapo we immediately placed priority on keeping the core tone of the Super Bass intact. The low-mid voicing in the Super Bass circuit takes single coil pickups exceptionally well and fattens them up to be on par with humbuckers. So the top priority for the El Guapo was that it have a super rich and authentic vintage sounding Plexi clean channel with all the authority and punch that you’d expect from a hand picked Super Bass.

Once that goal was met, I set about designing a Super Lead voiced second channel that would do everything from vintage Super Lead Plexi to modern high gain tones. The trick with the El Guapo was in crafting both channels to have their own unique voice without borrowing from each other and compromising each other’s design intent.

In order to make those two voices come into harmony with each other, it took a lot of careful planning and design work to keep the channels as independent as possible while still sharing a common set of tone controls. The final challenge was in creating a system where transition from one channel to the next is seamless and allows for a gradual upward shift in gain from Channel 1 to Channel 2. Finally that transition had to be completely silent when channel switching with zero artifacts and without compromising the tone.

After months of work I’m very pleased to say that I believe we hit our design goals and that the El Guapo is an incredible sounding amplifier. I feel that the El Guapo effortlessly captures some of the most iconic guitar tones from the past while pushing towards the future with modern high gain tones.

While I’ve never played a Jackson Ampworks amp, I’ve heard almost nothing but praise for their amps. As a guy who loves the sound of 100 watt Plexis, I’m hoping a shop near me gets one of these sometime soon.