I wrote about Landric Guitars a while ago, after playing a few of their guitars at a store in Milwaukee, Wisconsin. I was quite surprised by how well the guitars played and sounded.

Since first playing one of their guitars, I’ve had several email conversations with the builder, Rick Land, and have had the opportunity to meet him a few times and even become real-life friends with him. He is a great guy and builds a great guitar.

It’s often hard for new builders to get noticed when building S- and T-style guitars. There are so many builders out there that new entries sometimes get lost, even if they are really good examples of that style of guitar, as Rick’s are.

Rick realized this and, a few years ago, began working on a new body shape that he now calls the Chief. The guitar was designed in conjunction with monster guitarist Greg Koch, who has perhaps played more different guitars than anyone through his work promoting Fender guitars and doing demo videos for Wildwood Guitars in Colorado. All that to say, Greg has a lot of ideas on what makes a good guitar a good guitar, and Rick has incorporated some of his insights into the Chief.

A little while ago, Rick offered me the opportunity to take two of his Chief models for a spin for a few weeks. Although he offers both humbuckers and P90s in the Chief, the models I tested were both equipped with humbuckers. Other than color, the primary difference between the two was that one was equipped with a Bigsby and the other did not have a vibrato bar. This review will cover my thoughts on the non-vibrato model, and I’ll review the Bigsby model in a future post.

Rick told me that one of the design tenets of the Chief model was to combine the feel of a Fender guitar with the sound of a Gibson guitar, something many builders have tried with varying degrees of success. I think Rick has done a great job with this.

Here are a few of the specs:

A few things that I was curious about was how the chambered sugar pine would sound and how the scale length would feel. I found the sugar pine to sound fairly warm, but the maple top helped brighten the sound up a little. Ultimately, I would say that the tonal characteristics were very similar to my Gibson CS-336, which has a chambered solid mahogany body with a maple top. The Chief is a bolt-on guitar and has a slightly longer scale length than Gibson guitars, so it did have a “snap” to the tone that was reminiscent of a Telecaster, although a fairly beefy Telecaster.

The humbucker pickups that Rick uses on the Chief are custom wound specifically for this model by Klein pickups. They are lower output humbuckers, which gives them a clarity I don’t think I’ve heard in other pickups. The combination of the woods and the pickups lend for a really clear tone that you can shape however you want through your amp and pedals. If you want a little spank even when playing through an overdriven amp, just roll off the volume knob a little. Then, just roll the volume knob back up for a great, classic sounding humbucker tone.

I found the scale length to feel very similar to my Fender guitars. I’ve played other 25″ scale guitars that felt really cramped to me when I played them. This was not the case with the Chief. It truly felt like a full-scale guitar to me, just with slightly slinkier strings. When I returned the guitars to Rick, I asked him about this, and he said that Greg didn’t notice the shorter scale either and he’s been a Fender clinician for years so he’s very familiar with 25.5″ scale guitars.

The guitar was extremely comfortable to play, and I’m very picky about guitars. I’ve sold numerous guitars simply because I did not enjoy playing them. The Chief, however, sat really well on my body and, being chambered, was fairly lightweight (around 7 pounds). The Chief also has a body contour that further adds to the comfort of the guitar.

One of the best things about Landric guitars are their set up. I don’t know how Rick does it, but every guitar I’ve played that he’s built is set up as well as any guitar I’ve played including other high-end boutique builders. I didn’t have issues with the guitar needing to be tweaked, even though it had traveled from Wisconsin to Nashville in the Winter.

Furthermore, I found the attention to detail on the Chief to be outstanding. Little touches like a custom truss-rod cover, custom switch plate, natural binding, and matching head stock give the Chief a distinctive and high-end look, not to mention the sparkle that the finish has when you are close to it. It really is a beautiful guitar.

While not cheap at close to $3,000, I found the Chief to be a great guitar and compared favorably to other expensive guitars that I’ve played, including my Gibson CS-336, my Grosh Electrajet, and other boutique guitars. Additionally, you can order the guitar exactly how you want, which you don’t always find in the $3,000 price range.

If you’re looking for a unique, but classic sounding guitar with great build quality and attention to detail, I think the Landric Chief is worth a look.

Here are a few photos of the guitar I reviewed. Click on a photo to enlarge it. See more photos on the Landric Guitars website. 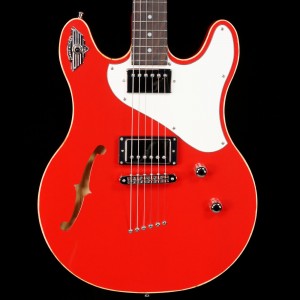 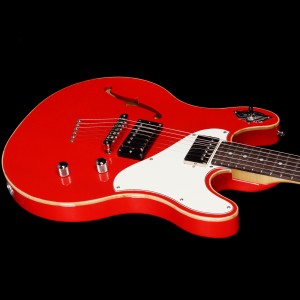