You are here: Home / Reviews / The Fender Telecaster: The Life and Times of the Electric Guitar That Changed the World 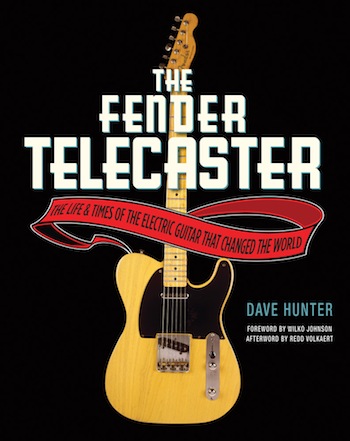 Fender’s Telecaster is one of the icons of the guitar world. It’s not just manufacturer’s hype that this is the one of the most famous guitars of all time—it was the first production solid-body electric guitar, setting the style for everything that followed. To say this guitar changed the world of music is no over-the-top boast.

This is the first history and giftbook devoted to the legendary Tele. It covers the development of the guitar and the famous players who made it their own, from the first 1949 prototype to the launch of the model in 1950 as the Esquire, through the Broadcaster, infamous “Nocaster,” the Telecaster—and its numerous variations today.

Much like the Les Paul book, the Telecaster book has tons of great photographs interspersed among a history of the Telecaster and the different models that have been produced throughout the years. Additionally, there are artist profiles throughout the book of some of the more famous Telecaster players, including Luther Perkins, Muddy Waters, Jimmy Page, Brent Mason, Danny Gatton, among many others.

The main draw of this book is the photographs. The included photos tell the story of the Telecaster throughout the years. Even without the artist profiles, the book would be valuable simply for all of the pictures, although the artist profiles are interesting too.

If you are interested in the Fender Telecaster or the early history of Fender electric guitars, I think you will like this book. You can purchase the book from Amazon or your favorite bookseller.