Taylor Guitars are introducing another guitar to their T5 line, the T5z:

ANAHEIM, Calif. – January 24, 2014 – Taylor Guitars is expanding its groundbreaking electric/acoustic hollowbody T5 Series with a sleek new sibling, the compact T5z. Like the original T5, the T5z boasts incredible tonal versatility, enabling players to shift from pristine acoustic to growling electric with the flip of a five-way switch. The difference is a scaled-down body size and a fretting experience that will feel familiar to electric players.

Among the T5z’s distinctive design features are a 12-inch fretboard radius (compared to the T5’s 15-inch radius) and jumbo frets, which make bending strings easier. Otherwise the T5z retains all the great performance features of the original T5: a three-pickup configuration, five-way switching, tone controls that dial in a full-range of tonal flavors, from heavy riffs to delicate fingerpicking, and dual compatibility with acoustic and electric amps.

For 2014, both the T5z and T5 will be released in a series of four models, each distinguished by the top wood: the Custom (koa top), the Pro (curly maple top), the Standard (Sitka spruce top), and the Classic (mahogany top). The Pro is available in four colors: Borrego Red, Gaslamp Black, Pacific Blue, and Tobacco Sunburst; the Standard is offered in Black, Honey Sunburst, and Tobacco Sunburst.

The original T5 was released in 2005 to rave reviews, winning both the “Best New Electric Guitar” and the”Best New Acoustic Guitar” from industry publications, and was named the “Product of the Year” by The Music and Sound Retailer magazine. Its versatility as a performance tool has made it an essential addition to the guitar rigs of many artists, including Jason Mraz, Taylor Swift, Miyavi and others.

I’ve never played any of Taylor’s T5 guitars, but I’ve heard great things about them. 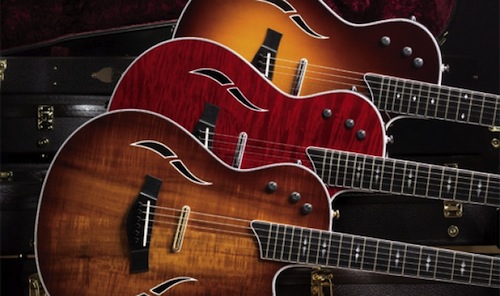