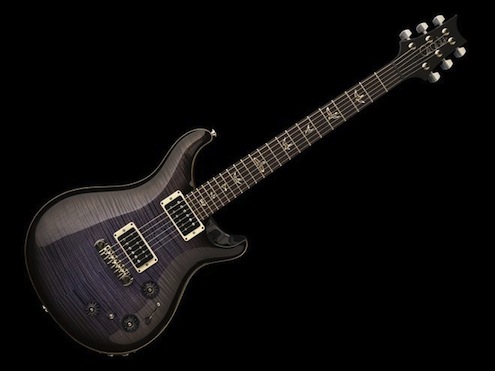 Music Radar has received details about a new Paul Reed Smith solidbody model that features a piezo pickup, a feature that had previously been available only on their hollowbody models:

Paul Reed Smith Guitars is proud to add the P22, the company’s first piezo-equipped solidbody guitar, to its 2012 lineup.

The P22 comes standard with a figured maple top, mahogany back, mahogany neck with a 22 fret rosewood fingerboard, and a redesigned PRS/LR Baggs piezo system. PRS and LR Baggs partnered more than a decade ago to design the piezo system found in PRS’s popular hollowbody models.

This new system retains the same circuit design as the existing system, giving the P22 the same tonal authenticity and real world practicality as PRS hollowbody guitars. The redesign of the board itself yielded a version that is more than 60% smaller than the original PRS/LR Baggs system, allowing it to comfortably inhabit a solidbody guitar. Uncovered 53/10 pickups round out this guitar’s specifications and help define the P22’s voice.

“I was blown away”

“I have recorded and mixed hundreds and hundreds of acoustic guitars, including mixing both live and studio cuts, and I have never heard a more musical, more natural sound from an acoustic pickup system. If that had been the only thing special about the guitar I would have been excited, but then to hear the electric tones it creates – I was blown away,” said Grammy Award-winning Producer and Engineer Don McCollister after a recording session with the P22.

Piezo systems have long allowed guitarists the versatility of wielding both acoustic and electric guitar tones in one instrument. The PRS Hollowbody II and Singlecut Hollowbody II both come standard with the original PRS/LR Baggs piezo and have achieved a great level of popularity in PRS Guitars’ product line. The addition of a solidbody model will give musicians a new and unique tool to add to their own lineup.

“The ability to blend in an acoustic sound along with whatever electric tone you are recording would be a game changer in certain situations. I noticed that it really helped the notes ring clearly through the haze, which is a tough thing to accomplish in a complex mix sometimes. I could see it becoming my go-to session guitar, and I’ll be one of the first in line when it comes out!,” continued McCollister.

After nearly a year of work from concept to completion, the P22 guitar will begin shipping in the first quarter of 2012.