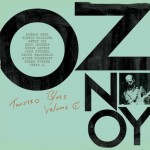 One of my favorite modern jazz/funk/blues/fusion/etc. guitarists, Oz Noy, is going to be releasing a new album titled Twisted Blues Volume 1 on November 21. The album was recorded in Austin and New York. The Austin sessions featured Eric Johnson on guitar, Chris Layton on drums, Roscoe Beck on bass, and Reese Wynans on the organ. The New York sessions featured Vinnie Colaiuta and Anton Fig on drums, Will Lee on bass, John Medeski and Jerry Z on organ, Allen Toussaint on piano, and Ralph McDonald on percussion. This will be Noy’s first release for Abstract Logix.