In November 1977, after completing a 6 month world tour, Rory Gallagher and his band flew straight from their last show in Japan to San Francisco to begin working on a new album, with famed American producer Elliot Mazer (Neil Young – ‘Harvest’, Janis Joplin – ‘Cheap Thrills’, The Band – ‘The Last Waltz’). Mazer recalls that the sessions grew “tense”, as Gallagher wasn’t happy with the mixing process, describing them as “too complicated”, and by the end of January 1978 he shelved the whole record and broke up his band of the past 5 years.

Fast forward to 2010 and Rory’s brother and manager, Dбnal, allowed his son & Rory’s nephew, Daniel, to recover the album from the Gallagher archive and begin the process of mixing it with his engineer. Rory said in 1992 he hoped the album would surface one day but only if it were remixed and now we finally get to hear this never before issued studio album from a key period of Gallagher’s career, an album that would have been released between ‘Calling Card’ and ‘Photo Finish’. This is truly a ‘Holy Grail’ release for Rory’s fans.

The second part of the album is a live show recorded at the Old Waldorf in San Francisco in December of 1979. Unlike the band that recorded the studio album, the live album features Gallagher performing as a trio with Gerry McAvoy on bass and Ted McKenna on drums.

The track listing for the double-album is: 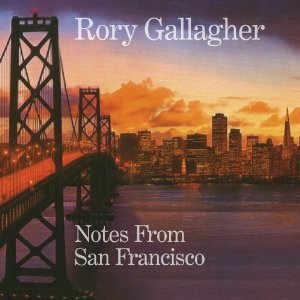