Details of Joe Bonamassa’s next album, titled Dust Bowl, have been released:

Dust Bowl was recorded in sessions at Black Rock Studios in Santorini, Greece, Ben’s Studio in Nashville, TN, The Cave in Malibu, CA and The Village in Los Angeles, CA. It combines the gritty, blues-based tones of Bonamassa’s first albums with the fluid, genre-defying sounds he’s mastered in the years since and adds a dash of country from Joe’s collaborations with the best of Nashville including legends Vince Gill and John Hiatt.

“Dust Bowl,” Shirley explains, “is very firmly rooted in the Blues, but definitely explores the outer reaches of the genre and showcases Joe’s amazing virtuosity as he digs deep into his psyche in some lengthy and blistering guitar solos.”

“This is the best album we’ve ever done,” adds Bonamassa. “I’m finding more inspiration in storytelling in my 30s, in writing songs that are about something more profound than ‘my baby left me.’ I like albums that are made with the right intentions and sound organic and a little rough around the edges, like a great band playing live in the room, and that’s what we accomplished with Dust Bowl.”

The album opens with Bonamassa originals “Slow Train,” an old-style British Blues song, and title track “Dust Bowl,” the album’s first single. “The title track of the album just describes my life. It really fits my voice, it fits me as a solo artist and just has a really nice feel to it.” Other standout originals include “Black Lung Heartache,” “The Last Matador of Bayonne,” and “The Whale That Swallowed Jonah.”

The next Black Country Communion album is scheduled to be released in the summer, so 2011 is looking to be another big year for Joe Bonamassa. 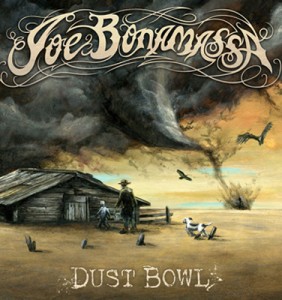