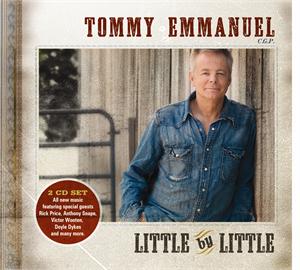 I recently received news that Tommy Emmanuel will be released a new double album called Little By Little. The new double album will feature new songs, as well as songs that he has been performing live for several years, but never recorded in a studio. Several guests appear on Little By Little, including Doyle Dykes, Victor Wooten, Dr. John Knowles, Rick Price, Pam Rose, Anthony Snape, and more. The double album is available for pre-order on Emmanuel’s site CertifiedGuitarPlayer.com and will begin shipping in early December.

The track listing for the album is as follows:

Below is a promotional preview of Little By Little with Emmanuel talking about the tracks on the album: