You are here: Home / General / Contest: Win a Copy of Steve Morse’s Out Standing in Their Field 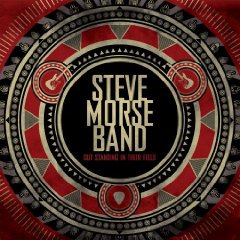 I’m happy to announce another contest here on Guitar Lifestyle! I have several copies of Steve Morse’s latest CD Out Standing in Their Field to give away.

In my opinion, this is one of Morse’s best albums in a long time. Like Morse’s previous albums, he melds various styles together to create an eclectic album of great guitar playing, as well as great bass playing by Dave LaRue and great drumming by Van Romaine.

There are two ways to win a CD. The first way to win is to send me an e-mail from the contact page using the subject “Morse Contest”. I’ll randomly select a winner from the e-mail entries.

The second way to win is by tweeting about this contest on Twitter, with a mention of my Twitter name: @guitarlifestyle. I’ll randomly select a winner from the Twitter entries. Although you are not limited to using the following text, here’s an example tweet you can use to enter this contest:

Win a free copy of Steve Morse’s latest CD Out Standing in Their Field from @guitarlifestyle: http://bit.ly/6qW9Wb