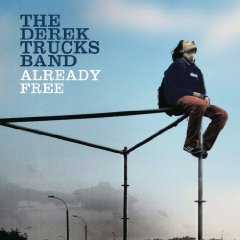 This is just a reminder that the Derek Trucks Band released their latest album, Already Free, yesterday. I’ve listened to a little of the album already, and I think it’s one of their best albums so far.

Although they still manage to play music with diverse influences, this album seems more cohesive than some of their other recent material. They just keep getting better with each album release. I’ll be posting a more thorough review later this week, but I really like what I’ve heard so far.