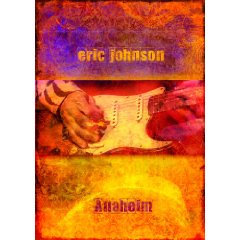 I was looking on Eric Johnson’s Web site and noticed that he released a new live DVD, titled Anaheim Live, on November 11. The DVD was recorded at the Grove in Anaheim, CA on May 3, 2006.

The set list includes some of Johnson’s biggest hits as well as songs from his latest album, Bloom. There are also several bonus acoustic performances of Wind Cries Mary, Song For George, and Song for Lynette. The acoustic performances are from Johnson’s 2004 acoustic guitar and piano show at the Galaxie Theater in Santa Ana, CA. In addition to the performances, the DVD also features an interview with Johnson.

The full set list of the Anaheim Live DVD is:

Summer Jam
My Back Pages
Trademark
Manic Depression
On The Way To Love
Rocktopus
S.R.V.
Little Bit Me Little Bit You
Cliffs Of Dover