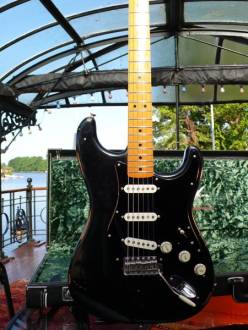 Here’s what DavidGilmour.com has to say about the guitar:

In the two years that the guitar has been in discussion, a number of prototypes have been produced, and the final version was only approved when David was happy that all elements combined to make a sound that was as close as possible to his own guitar’s. The ‘Black Strat’ comes in a hard case (by G&G) stuffed with extras: Phil Taylor’s ‘Black Strat’ book, a set of GHS David Gilmour Boomer strings, a copy of the 3-disc version of Live In Gdańsk, a cable by Evidence Audio, a deluxe Fender leather strap, and a David Gilmour plectrum. The interior of the case is a plush green, including embroidered David Gilmour and Fender Custom Shop logos.

There will be two models: a relic model and a ‘New Old Stock’ model: