You are here: Home / General / Frets on Fire 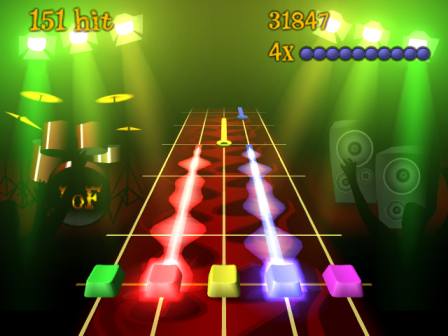 Frets on Fire is a cool-looking open source clone of the Guitar Hero series of games. It is available for Windows, Linux and Mac OS X (although the Mac version is listed as experimental).

I downloaded and installed the latest release. The installer worked great and quickly finished without much user intervention, which isn’t the case with a lot of open source software. The developers really have done a great job. While the game is obviously not as polished as Guitar Hero, I didn’t have to pay $80 for the game. And, the game is quite a bit of fun!

I enjoy playing games, but I generally play in spurts of 30 minutes or so. Frets on Fire is perfect for gamers like me. You can start up the game, play a couple of songs, and feel satisfied. Or, if you’re so inclined, you can play the game and compete against other players from all over the world.

Because the game is open source, you can dig into the source code to see what’s going on under the hood. I can’t imagine that most people who play the game will want to do this, but as a programmer I’m interested in taking a look at the source code. The game was written using the Python programming language.

Overall, I think that Frets on Fire is a fun (and free!) alternative to Guitar Hero and is available for all of the major platforms.